QuadraTENS is a safe, simple, low-cost and effective alternative to narcotic drugs for managing orofacial pain. Unlike drugs, QuadraTENS stimulation has no side effects (nausea, tiredness, etc.).

In the past sixteen years, many clinicians and patients have found Quadra TENS to be remarkably helpful in managing facial, head and neck pain.

How Does It Work? 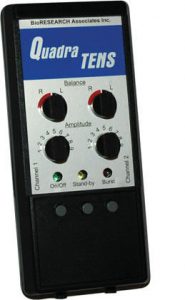 Quadra TENS is a compact, Ultra-Low Frequency, Transcutaneous Electrical Neural Stimulator (ULF-TENS). This ULF-TENS delivers a precisely regulated, rhythmic stimulus to both masticatory and facial muscles. A single pair of electrodes provides gentle stimulation, mediated through the fifth (Vth) and seventh (VIIth) cranial nerves, so that the benefits are received by the entire masticatory and facial musculature.

When compared to 3-electrode units that require a ground on the back of the neck, the BioTENS is rated “much more comfortable” by patients. Clinicians appreciate BioTENS for its “precise control of left right balance.” An optional electrode placement, on the posterior triangle of the neck, bilaterally, provides stimulation of the eleventh (XIth-accessory) cranial nerve, which contains the motor fibers to the trapezius and sternocleidomastoid muscles. Of course, many other electrode sites can also be used.

When BioTENS is used to relax muscles prior to taking a clinical bite registration, it is possible to observe the effect of the ULF-TENS on the muscles by recording the electrical activity with an electromyograph (BioEMG II). The BioEMG II can show the levels of activity before and after the TENS pulsing. Many pain patients exhibit more muscle activity before pulsing and less activity after pulsing.

An optional pair of electrodes placed bilaterally on the posterior triangle of the neck allows for stimulation of the eleventh (XIth accessory) cranial nerve, which contains the motor fibers to the trapezius and the sternocleidomastoid muscles. Alternatively, the electrode pair may be placed directly over the motor point of the trapezius or at any other site.